Questions every fleet owner has about hybrids, answered

What is a Hybrid vehicle?

A hybrid is a vehicle that combines the use of a traditional gasoline engine and an electric motor. Like battery electric vehicles (BEVs), all hybrids have a motor and battery. But there are two varieties of hybrid electric vehicles (HEVs) that people often mix up: conventional and plug-in hybrids.

Conventional hybrid vehicles, also called mild hybrids, have both an internal combustion engine (ICE) and an electric motor that uses batteries. Instead of plugging the vehicle into an outlet to charge the battery, it is charged while it’s being driven via the engine, and regenerative braking. When a car decelerates, the regenerative braking system captures kinetic energy and stores it in the battery to power the electric motor.

A plug-in hybrid, also called a full hybrid, has a battery that can either be charged through regenerative braking, the engine, or be plugged into an electrical outlet. Plug-in hybrids have larger batteries than regular hybrids, so you can drive in all-electric mode for a longer distance (~15-40 miles). Using all electric mode, a vehicle driving 100 miles a day may be able to drive up to 40 purely on electricity and the remainder with the conventional engine, cutting fuel consumption. Federal tax credits for electric cars are based on battery pack size. Plug-in hybrids typically qualify for some federal tax credits.

What are the benefits of a hybrid vs. a battery electric vehicle (BEV)?

There are countless benefits to hybrid electric vehicles, but whether or not hybrids are right for your fleet will vary on a number of things. Maybe you’re considering upgrading your gas-powered vehicles and are on the fence about a newer gas model or a hybrid. Maybe you know you want a more environmentally-friendly vehicle, but can’t decide between a BEV, a plug-in hybrid or a conventional hybrid. No matter what boat you’re in, there are some things to consider:

Should I buy a hybrid or electric car? Conventional hybrids vs. battery electric vehicles

BEVs are gaining major popularity, but there are a few reasons a hybrid might be a better fit than a fully electric vehicle, depending on the needs of your unique fleet. Read on if you’re stuck between hybrid or electric.

Less change. Taking on ownership of an BEV is a little more complicated than taking it for a test drive and writing a check. Fleet owners have to think about timing their routes around available charging stations, installing charging stations at a depot location and training their drivers. (And when doing all that, it’s usually helpful to have a BEV fleet expert by your side to help you reap the tax benefits and grant funding to get max financial gain).

Hybrid electric vehicles, on the other hand, are a way for consumers and fleets to dabble their feet in the green market without having to worry about range anxiety or major changes in their routes.

Greater variety. When thinking about hybrid vs. electric, consider that there are only about 19 battery electric vehicle models available in the United States, with Tesla holding more than 55 percent of the share of total BEVs sold in the country. Conversely, there are almost 130 forms of hybrid vehicle models to choose from, with new models recently coming out from Toyota, Lexus and Volvo. Most commercial BEVs in the United States are only available in smaller sizes, although battery electric pickup trucks and large SUVs are expected to pick up in popularity very soon as manufacturers roll out new models. The hybrid models have a far greater variety in what’s available and affordable right now, with everything from hybrid pickups to SUVs.

Better remarketing options. In general, the buyer for a BEV is usually going to be an early adopter who prefers to get the newest, most high-tech model. Until BEVs become more popular across the United States — which is expected to happen soon — there’s not a large market for used BEVs. Conventional hybrids are easier for an average consumer to buy since they don’t require any charging infrastructure or change in daily habits. Because of their popularity, there’s a much larger market for used hybrids, making them easier for remarketing.

Interested in the benefits of hybrid electric vehicles, but not sure if it’s worth it to make the jump? In many cases, the total cost of ownership for a hybrid ends up being lower than a gas-powered vehicle. Here are a few other reasons you may consider procuring hybrids instead of gas vehicles:

Positive brand image. About 60 percent of people say they think about a company’s environmental impact when they’re deciding from whom to purchase. If a fleet wants to make sustainability a key priority (and based on the data, they should), swapping their gas vehicles for similarly-priced hybrid vehicles is a great place to start. For example, a sustainable landscaping business can promote their commitment to being an environmentally friendly company. A business like that can “walk the walk” by swapping their gas-guzzling fleet for hybrids.

Maintenance costs are a draw. A common concern from potential hybrid buyers is that the electric motor will require additional maintenance; however, most hybrid cars don’t require any regular maintenance on the hybrid-specific components. Combustion and hybrid owners will typically spend around the same amount on regular maintenance tune-ups, since they both have an engine. Battery degradation on hybrids is basically a non-issue; if batteries do degrade, the hybrid-specific components on hybrid vehicles are covered for anywhere from eight years/100,000 miles to 10 years/150,000 miles.

“You don’t hear about hybrid battery packs having to be replaced,” said Nate Shadoin, Electric Vehicle and Automotive Fleet Consultant. “The concern comes from some of the early BEV models, where the battery technology was rudimentary and offered only a short range per charge and a major concern was that if the battery had to be replaced, that the vehicle would be totaled.”

Better fuel economy. A gas vehicle will only burn gasoline to move. But since a hybrid vehicle will charge through regenerative braking while driving, you’ll significantly cut the amount of money you need to spend on gas and be able to drive longer distances.

Is the better fuel economy really worth it?

Hybrids were a source of excitement between 2008 and 2014 when the average price of gasoline floated around $3.50 per gallon. But since $3+ gas is becoming a distant memory, people in the market for a new car might wonder if a hybrid is really worth the fuel savings.

How much gas do hybrid cars save?

The more fuel-efficient a car is, the more money you’ll save in the long run. For example, if a gallon of gas is $2 and you drive it 20,000 miles a year, a gas vehicle averaging 25 mpg will cost you $1,600 in a year. A hybrid averaging 42 mpg will only cost you $975 for a year of gas — you’d save $625 in that case. Now imagine you replaced all the higher-mileage vehicles in your fleet with fuel-efficient hybrids. The savings skyrocket.

What fleet industries are best for hybrids?

Fleets that primarily travel around one city — like taxis, black car services, pharmaceutical and medical couriers and sales fleets — will benefit the most from a hybrid vehicle. In comparison, fleets that are filled with long-distance highway driving will benefit the least. That’s because in an urban route, there is a lot of stopping and starting when approaching red lights, stop signs and traffic jams. This start-stop technology triggers the hybrid’s regenerative braking, which powers the electric motor and gives you that sought-after fuel economy.

What’s the difference in the total cost of ownership (TCO) between a hybrid and similar gas vehicle? 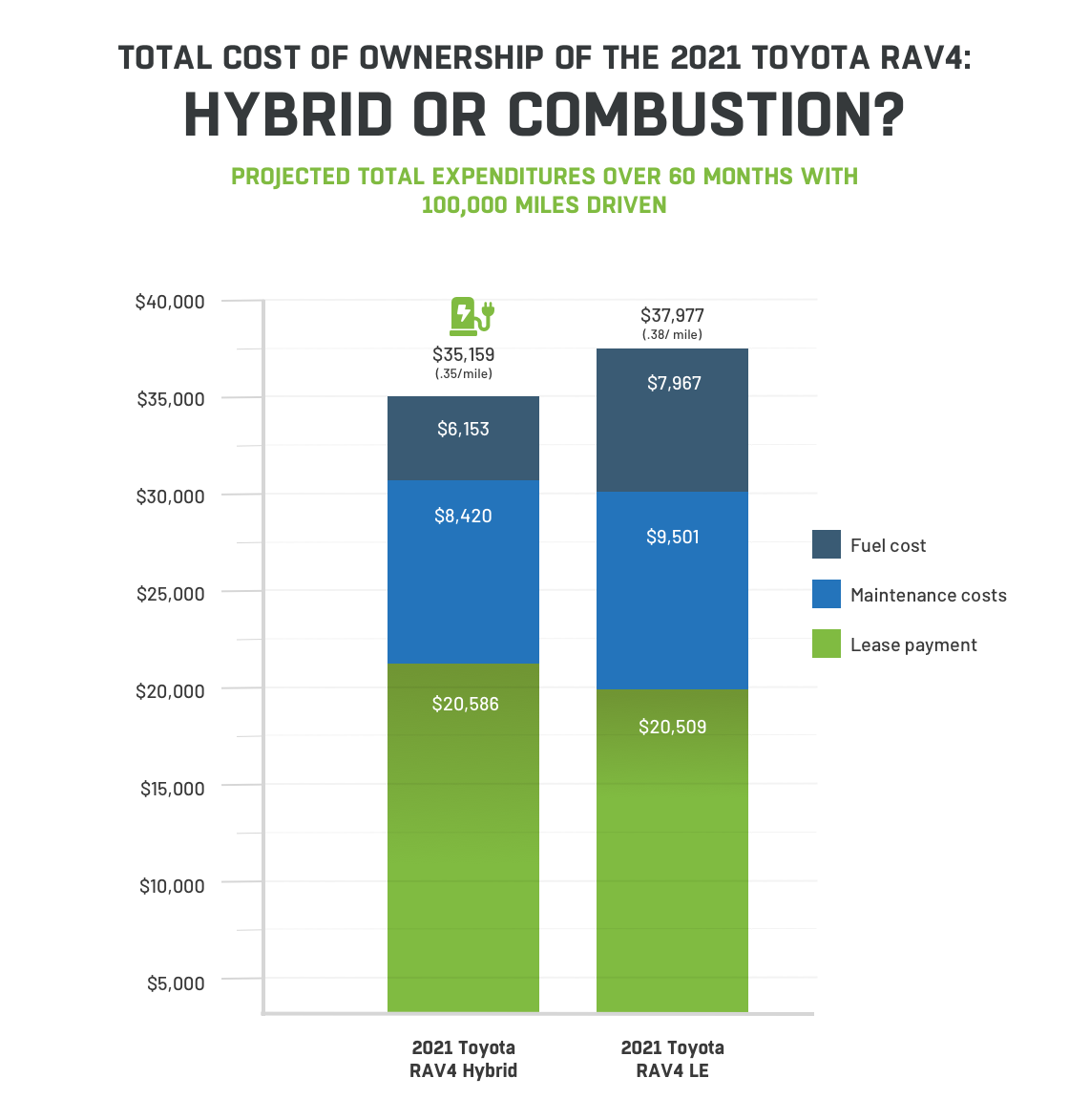 Where do hybrid vehicles fall in the future of fleets?

Many manufacturers are coming out with hybrid versions of their gas vehicles, but is it worth it? An electric Ford F150, for example, is set to come out next year — and while that boasts 25 percent mpg better than their gas engine model, that adds up to just four extra miles per gallon, according to Shadoin.

“A lot of manufacturers may use their R&D dollars to bring BEV models to market,” said Shadoin. “I don’t know what the future for the hybrid holds, because it depends on if people fully adopt BEVs or not. There’s a chance that hybrids could be the more mainstream solution.”

While some manufacturers may want to accelerate to hybrid, it’s important to consider what consumers are actually interested in. Researchers with Cox Automotive asked consumers whether or not they’d consider buying several vehicle types in 2021. While 41% said they’d still consider traditional gas engines, hybrids came in at a close second place with 32%. Consumers also said they’d consider plug-in hybrids and BEVs at 20 and 30%, respectively.

Better gas mileage and a lower carbon footprint may be ideal when it comes to hybrid vs. electric, but not every consumer (or fleet owner) is ready to take on range anxiety of an BEV, especially in parts of the U.S. where charging stations are far and few between. For many, conventional hybrids really are a great fit with environmental benefits, an affordable total cost of ownership and less time and money spent at the gas station.

“Hybrids have many of the benefits of BEVs but take range anxiety out of the equation,” said Shadoin. “They really are a great combination between combustion and electric for forward-thinking fleet owners.”

Fleet Affected By The Supply Chain Shortage? Here's What To Do
Guides | June 24, 2021
Learn the benefits of a purchase lease back program
Guides | July 29, 2021
Data: The secret to giving your fleet a competitive edge
Guides | September 3, 2021