A definitive guide to smart cities.

Smart cities use technology to transform environmental, social and financial aspects of daily life. Read more to get the basics about what constitutes smart cities. 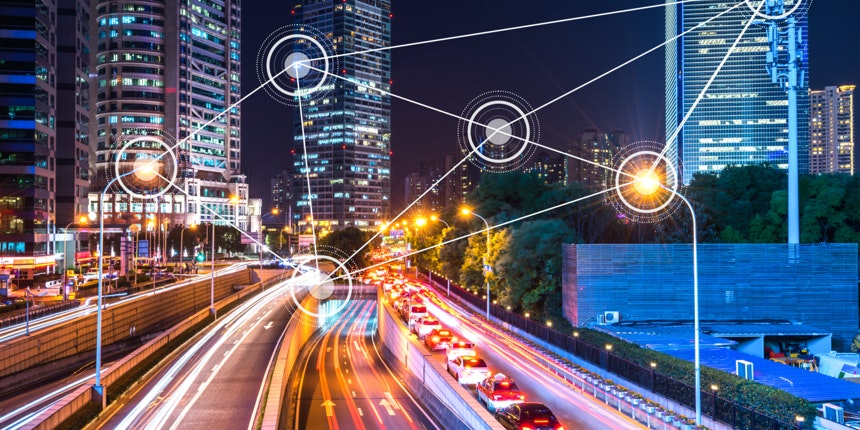 If you’ve ever sat idling at a red light on a desolate road, spent far too much time searching for a parking spot, or found yourself walking along a dark path before the lights come on... you know that today’s city infrastructure is far from perfect.

But in a seamlessly functioning city, also known as a smart city, technology thinks two steps ahead of you. It turns lights green the second the coast is clear, it alerts your GPS to the closest parking spot as you near your destination, and it automatically lights up the sidewalk when it’s dark.

From adding EV charging stations to installing app-powered parking meters, a number of cities have already adopted smart city technology in some capacity as they move toward becoming a smart city. And there’s a demand for it: With 60 percent of the global population expected to live in urban areas by 2050, cities must digitally transform to meet the needs of a rising population.

What makes a city smart?

The more that cities start to adopt smart technology, the closer they get to becoming a smart city. But do those things automatically make a city “smart”? What is a smart city, anyway?

In 2015, the U.S. Department of Transportation launched the first-ever Smart City Challenge, asking mid-sized cities across the country to apply for a $40 million grant to become America’s designated Smart City. The midwestern mid-size city of Columbus won, which began beginning their Smart Columbus initiative. Tasked with helping define what it means to become a smart city, the still-ongoing goal is to fully integrate innovative technologies, especially in regard to smart city transport.

Since being awarded that grant, Columbus has undergone many changes, including the addition of the Smart Columbus Operation System, a virtual dashboard that monitors traffic, fire and police reports, and public transportation. In response to the environmental impact that comes with most vehicles holding just one driver at a time, they launched a Smart Circuit self-driving shuttle. Riders can hop in seven days a week for free along a popular 1.5-mile route. They’ve also launched an app for anyone to track where the local buses are.

Although defining in and of itself, Smart Columbus is just one example of a regular city that has taken initiative in becoming more tech-savvy. These cities are far more than just techy urban areas, though. While hard to narrow them down to just one definition, smart cities generally have a few of the following things in common:

Internet of Things for smart cities is how cities stay connected to their people. To put it simply, IoT bridges the gap between the physical and digital world and connects technologies with each other. Your “Alexa” speaker uses IoT when she tells you the weather or adds events to your calendar. Your Apple Watch uses IoT when monitoring your steps and heart rate day-to-day. Businesses like grocery stores use IoT to track consumer paths throughout a store and monitor high-traffic areas to better design layouts.

Smart cities take IoT technology to a larger scale. Virtually everything can become IoT-related. Take a typical day: As you walk to your car in the morning, street lights are motion-detected to light your way. You throw your trash in a can that’s never overflowing, because smart waste management is alerted to pick it up once it reaches a certain level. On your drive to work, your phone’s GPS alerts you of available parking spots and EV charging stations in real time.

Many cities have already started employing this technology: Amsterdam was one of the first cities to use IoT-based infrastructure to help monitor traffic flow. Boston and Baltimore have deployed smart waste management use with sensors in cans, and Barcelona has added a municipal network of free Wi-Fi.

“The operating system’s job is for data to be available to innovators, entrepreneurs, and data scientists to help improve safety and the mobility ecosystem. We’re still in the early stages… making sure we have the broadband and fiber to power it. IoT is going to enable data collection to any source.

Smart cities are sustainable cities. They can help lessen the environmental impact in urban areas and aim to cut excessive water and energy. Most smart city projects have a smart city initiative aimed specifically toward ways to reduce a city’s CO2 emissions.

Smart-city solutions — which include things like monitoring air quality, optimizing energy use, and tracking waste — can lead to 10-15 percent fewer greenhouse gas emissions, 30-130 fewer kilograms of solid waste per person per year, and 25-80 liters of water saved per person per day.

Of the most sustainable cities in the world, many achieve their goals through smart solutions. Sydney, in the top 10, began a Sustainable Sydney 2030 initiative to reduce carbon emissions by 70 percent — and plan to do so by reviving their public transportation. Ranking first in the Huawei’s UK Smart Cities Index, London is pursuing a Low Carbon Capital strategy to reduce carbon emissions by 60 percent by 2025 through smart technology.

3. Smart cities aim to make the world a safer place

With smart-city security comes lower rates of crime. Smart applications used by cities can strengthen public safety. Deploying a range of applications to their maximum effect is estimated to reduce deaths from homicide, road traffic, and fire by 8 to 10 percent.

For example, crime mapping in real time identifies patterns and can anticipate crime to staff for incidents before they happen. When a crime is committed, smart apps can detect gunshots to alert law enforcement more quickly. To put this in perspective, in a high-crime city with a population of 5 million, smart apps could save 300 lives a year and lower assault, burglary, and auto theft by 30 to 40 percent.

And speed is critical for first responders reaching an emergency situation. Smart systems optimize call centers, and traffic-signal preemption can make way for a clear driving path for ambulances. These types of applications could cut emergency response times by 20 to 35 percent.

The use of data for certain things can help make cities more efficient. Many cities have outlined specific plans to use data from smart city technology to help better inform decisions about city infrastructure.

But such a large amount of data is bound to lend itself to data privacy issues, as it can be used for more than just city infrastructure. Unlike apps, cities can’t feasibly have users check a “terms of service” box that gives permission to access your data. In recent years, technology has been increasing quickly — and it often takes time for legislation to keep up. While Europe recently passed the General Data Protection Regulation, the United States may need to develop more specific policies to govern privacy concerns for smart cities.

Further, city officials need to ask if consumers will be able to easily accept a digitized way of life. In a city where you may not be able to so much as walk down the street without having your data collected or get on a bus or public transport without a smartphone, what might this mean for customer adoption across all demographics? As new technology comes out and is adopted on a large scale, living without it becomes increasingly more difficult.

It also raises questions about the efficiency of new tech. Sure, it may improve efficiency in theory, but what kind of training might everyday citizens need to actually use it? And if there are tech issues and struggles, what frustrations could this lead to? These are all questions cities must ask.

In 2018, McKinsey published an analysis of what drives citizen adoption of smart city technologies for leading smart cities in the world including Dubai, Hong Kong, Mexico City, Moscow, New York, São Paulo, Seoul, Shanghai, and Singapore. Of those cities, the usage rate of the most widely used smart technology available reached 70 to 80 percent, and the average age of adults was 41 years old.

Fleet managers should be aware that smart city transport is one of the most defining aspects of smart cities, regardless of city size or climate. As emissions become more of a public concern, it’s clear that single-occupant, fuel-powered cars are simply not sustainable. As cities rapidly grow in population, fleet and mobility managers must think smart about getting people from point A to point B. 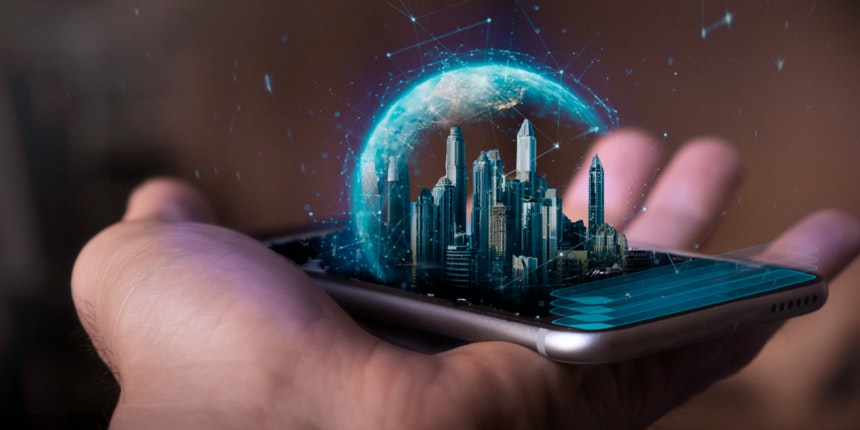 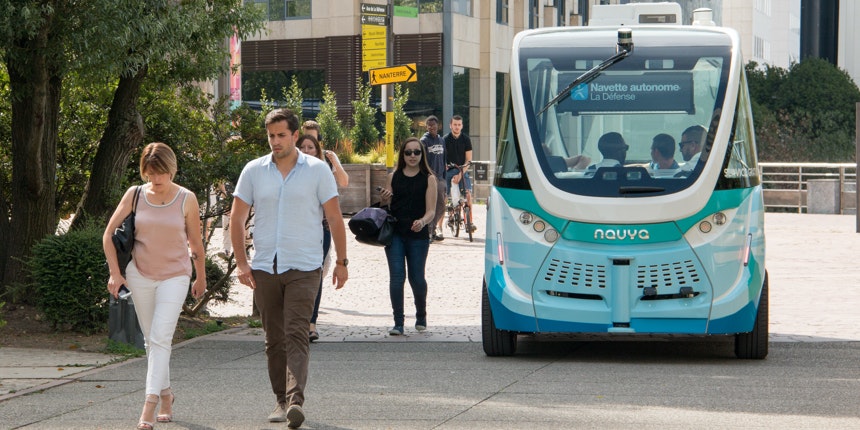 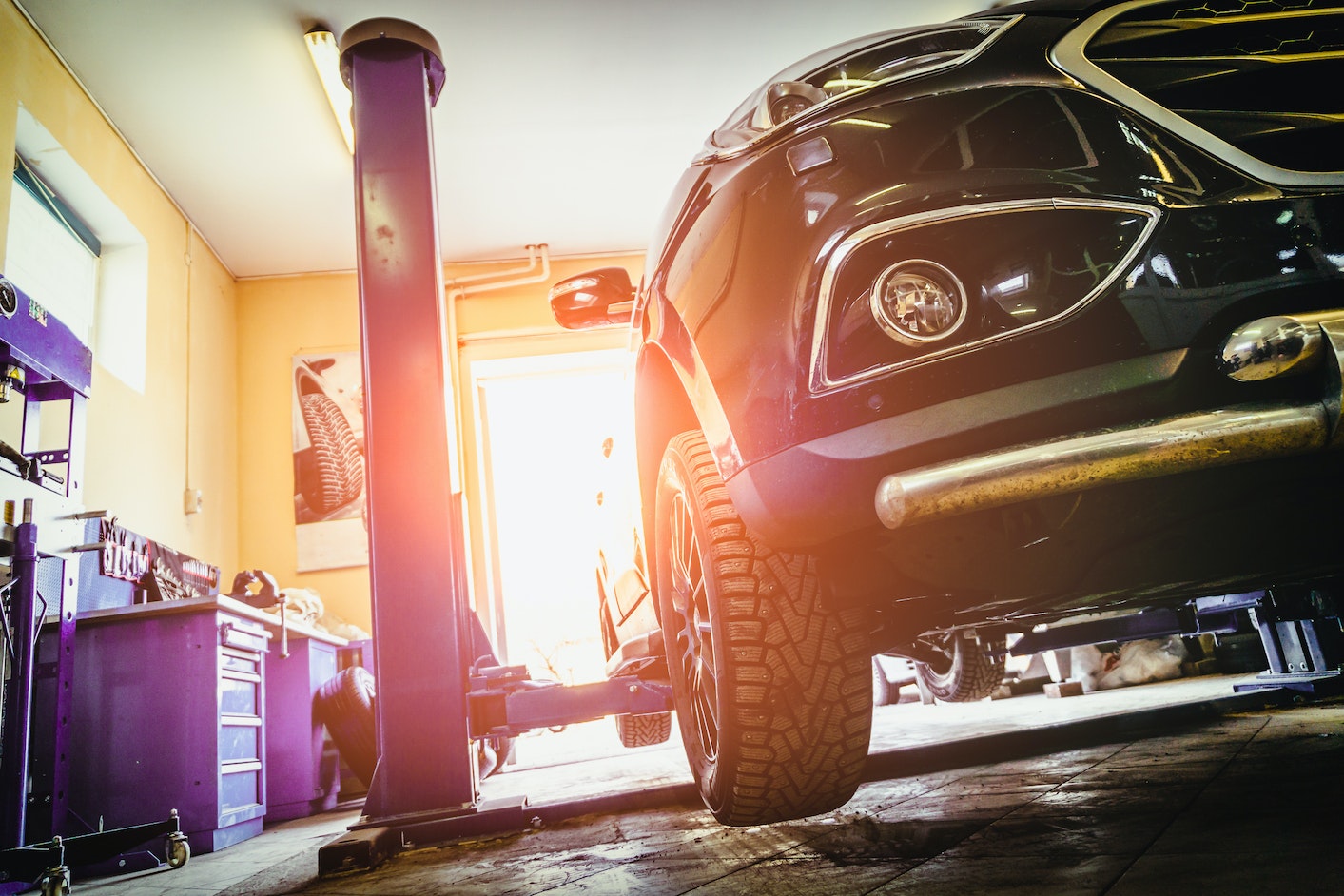